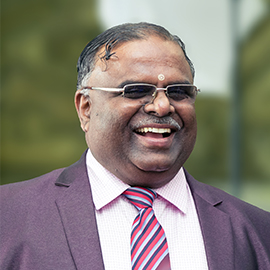 
At a time when even thinking about starting an industry was difficult in India; to have actually started it, hailing from a middle class family without any economic background or support, and to have successfully established the company that boasts of cutting-edge technology and technical expertise, and taking it to national and international levels in a span of just 21 years is a great achievement unparalleled in post-liberalized India. VOLTECH and its founder Mr. M. Umapathi’s life is an inspiring journey of a young Indian who overcame great obstacles and personal crises to come to the forefront of global India’s economic revolution.

Mr. Umapathi’s humble beginnings could be traced back to his birth into a traditional value-oriented Hindu middle class family in Tamil Nadu in 1960. The son of Murugesan and Valli Murugesan, his impeccable and distinguished academic career and his strong sense of probity earned him admission to the prestigious and elite College of Engineering, Guindy in 1977, which was rated amongst the best academic institutions in South Asia. Mr. Umapathi completed his B.E. specializing in Electrical and Electronics Engineering (EEE) in the year 1982 with flying colours.

VOLTECH’s origins in a car shed bear much similarity to the humble origins of its founding director. The Era of VOLTECH dawned in the year 1995 when Mr. Umapathi started 'VOLTECH Engineers' as a proprietorship company as an entrepreneur with 5 engineers in T-Nagar, Chennai. His dream of establishing a company on a national level was realized in 1998, when he set up a registered company in Bengaluru, Karnataka. Today, VOLTECH is a truly international brand, with a pan-India presence, as well as operations in more than 18 countries including Japan, South Korea, South-East Asia, South Asia, Persia, the Middle East as well as Africa.

A naturally gifted leader, with a congenial, amiable and agreeable disposition, Mr. Umapathi has over the years cultivated many admirers, friends and ardent supporters both within and outside his country. Mr. Umapathi is a distinguished member of a great many professional associations such as CII, FICCI, Andhra Chamber of Commerce, Chennai, National Chamber of Commerce, Chennai, Engineering Export Promotion Council – EEPC, Services Export Promotion Council – SEPC, Indian Electrical & Electronics Manufacturers Association – IEEMA, Institute of Engineers – Fellow Member (FIE) and Bureau of Indian Standards (BIS).

Presently, VOLTECH is a ₹ 5 billion conglomerate with global reach. Its multicultural outlook is reflected in its 4000+ employees spanning across 18 countries. VOLTECH having established a foothold in the UK, is now preparing for new vistas in Continental Europe and North America.

Mr. Umapathi's tireless striving with empathetic approach has made him Managing Director for the following Companies in India viz:-

Mr. Umapathi's directorship at VOLTECH over the span of 21 years has made it a truly international brand. VOLTECH today operates in more than 12 geographical territories spread across South-East Asia, the Near East and North Africa. In addition, VOLTECH is preparing its grand entry into the European Market with its operations based out of London

A company that never compromises on its business ethics, Indian ethos, sense of fair play and stakeholder-inclusiveness, VOLTECH has seen its business spread across the Mediterranean Sea into the highly developed, intensely competitive and legally stringent European Continent, and has its sprawling complexes located on either side of the Indian Peninsula, spanning from Africa, Near East to South East Asia. VOLTECH stands tall among Indian conglomerates, employing over 5000 professionals across diverse fields and boasting assets exceeding 3 billion Rupees

An advocate of meritocracy throughout his life, Mr. Umapathi’s commitment to lending a helping hand to deserving candidates from disadvantaged backgrounds is evidenced by the living testimony of 90% of his employees across his conglomerate who hail from families belonging to the low income group. Furthermore, the people who sit beside him at the helm of affairs were those loyal employees who have faithfully, dutifully and zealously stood by his side from day one.

The love and respect of the employees of VOLTECH is a manifestation of Mr. Umapathi’s affection towards his employees’ well-being and of their families, and their reciprocity is evidenced by the enviable status enjoyed in a decadent market plagued with attrition and defection. For those who are at VOLTECH, their careers, personal happiness and their successes are proof that their well-being was never compromised for the sake of their company.

Mr. M. Umapathi has set standards for other entrepreneurs to follow, not only in applied Engineering but also in Nation Building by setting aside a substantial part of his income for the education of the underprivileged and needy. He also has served at the helm of the Lion’s Club International as Regional President, and enjoys a huge amount of social goodwill as a result of his charitable disposition, and constant nurturing of the community in which he resides.

A naturally gifted leader, with a congenial, amiable and agreeable disposition, Mr. Umapathi has over the years cultivated many admirers, friends and ardent supporters both within and outside his country. Mr. Umapathi is a distinguished member of a great many professional associations such as CII, FICCI, Andhra Chamber of Commerce, Chennai, National Chamber of Commerce, Chennai, Engineering Export Promotion Council – EEPC, Services Export Promotion Council – SEPC, Indian Electrical & Electronics Manufacturers Association – IEEMA, Institute of Engineers – Fellow Member (FIE) and Bureau of Indian Standards (BIS).

An articulate and erudite gentleman, he is an excellent conversationalist in Hindi while being equally comfortable conversing in English. A patriotic son of the soil, his preferred natural vehicle of thought is still his native language, 'Tamil'.

All official correspondence and communication may be sent to the following address:

Mr. M. Umapathi is a globe-trotting business leader of a conglomerate that creates opportunities for global citizenship while still maintaining his intense patriotic identity. Mr. M. Umapathi strongly believes in the Keynesian theory of Economics, and as an employer provides tens of thousands of jobs to the Indian Market in general and to the Tamilian fraternity in particular. His success formula is not reflected in his unassuming nature nor his lifestyle but in his humble servitude to his fellow human beings.

Voltech Group celebrates its anniversary every year during October - November and as a part of CSR ( Corporate Social Responsibility) activity, its MD - Mr. M. Umapathi used to offer scholarship for the needy and deserved students to continue their higher studies. ( Approx Rs. 12 - 15 Lakhs every year)

Every year maximum 40 Nos of Students get benefitted through this activity and so far the total reaches more than 500 students.

"A Small Step to make a Giant Leap" - A Unique approach to provide basic needs to the least developed villages in and around Tamil Nadu.

Main objective of this Programme is to benefit the village which doesn't have the following amenities.

The same was officially signed through Kavi Perarasu Vairamuthu of Tamil Film Industry jointly by Mr.Chandrasekaran - Film Director on 20th October 2014 at Chennai Trade Centre, Nandambakkam, Chennai - 89 with the President of Vazhur Village.

Similar to the above, every year employees of Voltech Group donates their Organ through some foundations and so far nearly more than 100 Employees has donated their organs which includes the family members of Mr. M. Umapathi - Managing Director of Voltech Group